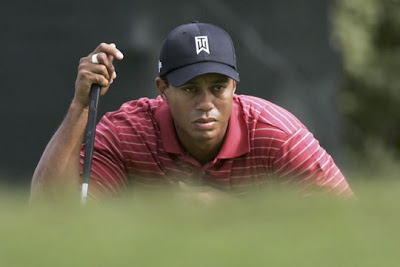 And Tiger Woods got divorced, officially. The man, who has dominated the sport – till date this century – cuts a lonely figure now on the greens, where once he prowled sans fear.

From the day he turned pro, he towered over all other sportsmen of the generation. A beacon for those who wanted to take up sport professionally. He was perfect, and made us feel that he could do no wrong. And we asked, “Is he human?”
Interestingly, almost on the eve of ‘International Year of Tiger’, he showed us signs that he was like one of us, giving in to the temptations. The frailty of human mind, and body, and the heart – just like us – could be seen in the Tiger. Woods was no longer the Tiger we knew, for his smile just before the putt, and the wave of hand just after, disappeared. The smiling assassin on the greens had lost his killer instinct. And soon, those who vowed to always stay with him disappeared too. A champion had become a challenger, a competitor, a mortal.
Woods was the biggest earning sportsperson in the world, and still retains most of it. But none of the millions he made teeing off can help his fall from grace. Many would talk of morality lessons, but the Tiger story tells the youngsters not to take their position for granted. The ‘magic’ that he created with his clubs has not left him, for they did not follow the sponsors – it was the sponsors who followed that ‘magic’. But the problems that surround Woods would make it doubly hard for him to recreate the same aura that once made other competitors categorized as ‘also ran’.
This is a case study, perhaps for sports psychologists. But also a case study every aspiring sportsperson should read. It tells you that nothing is permanent, neither success nor mental toughness or mental focus. In sports, everything is always on the verge of disintegration. You just need to blink your eyes a little longer.
The case is relevant in the Nepali context, as most players – even if they’re national champs – are still, the ‘aspirants’. In our participation at the World Cricket League Division 4, we were ‘aspiring’ to enter the World Cup.
Despite a couple of ‘misses’ at crucial matches, our cricketers have not fallen from grace, at least for now (Those who thought the World Cup berth was ours already, were daydreaming). But as we aspire to enter the World Cup, our players need to start thinking like the players at that level should. So far, this has not been seen. Right at the airport, after return, Nepali captain told the media, cricket has to be restructured in Nepal. Bravo Paras Khadka! Yes, cricket in Nepal has to be restructured, but airport is not the place to discuss it. And nor it is a smart idea to discuss it with the Press.
Paras is a smart cricketer, who believes in giving his best all the time. But he won’t go very far, if he’s not careful about what to speak and when, and of course – to whom. Any soundbite given to camera, any quote given to newspaper, goes in public sphere and does not remain your own. Cricket Association of Nepal may not be the best cricketing authority in the world – and needs restructuring for sure – but the dirty linen should not be washed in public. The national team captain definitely should be worried for facilities for cricketers and improvement of cricket in the country, but he also needs to be careful about every word he utters in public.
The batting debacle seen in recent championship has to be scrutinized, and tactics followed in Italy should be discussed, but with relevant people. Press will always question, but it is you who decides what to answer.
For now, Tiger Woods has chosen to remain silent, despite tabloids filling pages and selling extra copies talking about him. And who knows, one day – sooner than later – he may also bounce back, given he keeps his focus on the game.
Our cricketers too, will get another shot at the World Cup entrance.
But the question is, for Paras Khadka, how do we keep that focus?
(The article originally appeared in The Kathmandu Post, 27th August, 2010, in a weekly column of Yours Truly)