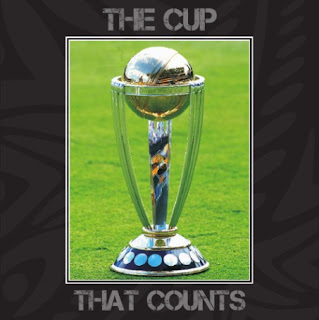 And the World Cup has begun. It is four years after the almighty Aussies conquered the Caribbean, making it three cups in a row – exerting the dominance never ever seen in cricket ever. It is four years after, we searched for a team Australia would meet in the final. And four years after, we see that the Cup is wide open, up for grabs for at least four top teams, if they can manage consistency throughout the month and half long celebrations.
But there are deeper questions that surround the ICC’s 49-match, 43-day, 13-venue event, this time around. Yes, it is being organized in the biggest money collecting bowl for cricket in the world – the subcontinent we are a part of. Yes, it is perhaps the last time we’d see the two of the best batsmen of our times – Sachin Tendulkar and Ricky Ponting, playing in multi-nation tourney. But this is also a time where ODI format is being questioned, for its worth, especially in the wake of the T20 onslaught.
Unlike in the past, the Cup’s 10th edition – even before it began – was labelled as the decider for what course the 50-over game will take in future. And in all the likelihood, everything that happens in this edition will have consequences impacting cricket’s future, almost immediately. The ICC now calls this World Cup, “The Cup that Counts”, which gives enough indication how important it could be. More so for non-Test playing countries like Nepal, since they’ve been preparing for past decade to be able to play in the World Cup under this format. Imperative that our administrators watch every action that takes place during the World Cup, both on and off the field.
Since the 1980s, ODI World Cup has kept cricket expanding and has been the best advertisement for cricket in non cricket playing nations. Netherlands, Canada and Kenya playing at the biggest stage in this format have kept our boys putting in that extra yard of pace, that extra bit of power in their shots, in their backyards. If that were to fall, we would have to rethink our strategies, and the same stands true for the countries like Afghanistan.
Test cricket still remains purists’ choice and delight. It’s not old, it’s mellow, like wine – they say. It’s there to stay – they say. But questions have been raised on the relevance of the shorter format – the one dayers. With more explosive and animated form of the game, added with oomph (read cheerleaders) and shorter duration – the T20s – there are questions over why is there a need for format that lasts entire day. It has become the new tequila shot for the non-purists. Why need anything when we already have wine and tequila – they say.
There were many who said bringing in Bryan Adams at the opening extravaganza of the World Cup fitted well. After all, Bryan Adams had his peak in 90s, the same time as the peak of ODIs. Both are losing their charm – is what they complain.
But then, how many of us do dislike ’18 till I die’ or ‘Everything I do’? It’s that spirit of openness and romance that remains in us, no matter how old. That’s akin to ODI format, which gave wings to cricket, just when Test matches began to become dull affair. The spirit of romance that ODI brought in cannot be compared with the oomph and money we see in the T20s. That ways Bryan Adams fitted well with the World Cup.
It’s also fitting Sachin Tendulkar now will make his presence in the World Cup as a brand ambassador. ICC chief executive Haroon Lorgat said once: “We are very lucky to have such an extraordinary player as Sachin supporting our flagship event.”
So if not for anything else, for him, we should rejoice this event. The event that began in Bangabandhu stadium in Dhaka, a place where history and the memories live in, a place where the fans have special bonds, should be toasted.
After all, despite the presence of wine and tequila shots, rare scotch whiskey has its own value. Its value lies in being mellow and having the sting at the same time.
So let’s celebrate the ICC World Cup 2011. For we can’t be sure – what it will be, four years after.
(The article originally appeared in The Kathmandu Post, 19th February, 2011, in a weekly column of Yours Truly)