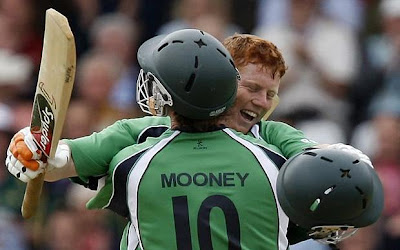 For once, the cricket fans in Nepal, and perhaps in some other associate members of International Cricket Council, are not very happy with Shahid Afridi, the Pakistani captain and all-rounder. For once, we do not want to cherish his five-for. For once, we do not want to be a part of his match turning performance. For, he blew up the possible juggernaut of associate members, a fairytale, we could have witnessed at this World Cup.
If it was not for his superb bowling efforts, Canada could have defeated Pakistan to create second miracle at this edition of the Cup. They could have pushed the cause started by Ireland, for ICC to reconsider its plans of hosting mere 10 nations at the WC 2015. Now we can’t blame Afridi for that. He’s paid in cash by his board and in respect by hundreds of thousands to do that job, thrashing the minnows and remain competitive with the top teams.
The Irish team defeating the Englishmen has been dubbed as one of the biggest upsets in the cricketing history, akin to Greece taking the Euro Cup football in 2004 or Boris Becker winning the Wimbledon in 1985, when he was just 17. True, it was one of the biggest shocks in World Cup history. This can also be assumed by the fact that, the bookmakers were ready to offer mere 400-1 odds for the relative minnows, trying their fate with the English team that had tied a match only a few days ago, against the mighty Indian team, at 338 runs.
The Ireland team chasing down the biggest target in Cricket World Cup history, at 328, is also a thumping challenge to the ICC executive board, which approved that 2015 CWC will consist of only 10 permanent members and associate members cannot participate in the tournament. Then, the decision had drawn flak from associate members and we’d started questioning if the acronym ICC actually stood for International Commerce Council and if the term ‘development’ did not actually feature in ICC dictionary.
But then, we associates hardly have a loud voice. At the time the world bodies of sport are lost in the cacophony of ringing at the cash counter collections, we, the associate members are regarded as the recipients, getting donations from them – the cost centers and not profit centers.
But now, the Irish cricket team, led by one of the best ODI innings ever from Kevin O’Brien, has given a thunder in our voice. The defeat of English team at the hands of Ireland is similar to Mike Tyson being defeated by little known James Buster Douglas in 1990. Never had a boxing ring heard such a loud thud, when Douglas knocked out the then undisputed world champion, Tyson in Tokyo. The thud, to many, is still deafening. It was a thud of minnows arriving. It was a thud of a new world order coming. The Irish team has created a similar thud. And the noise should be heard by those who sit in the executive board meeting of ICC. For, we, the associate members of ICC popularize the sport, make it reach millions more than it already has. We make it an international sport and not a game played just by former British Colonies.
We wish just that a few more minnows should replicate what Irish team has done. We need more O’Briens, more Douglas and there would be a day when we would see Paras Khadkas, Gyanendra Mallas and Binod Dases playing at the world stage.
The famous songster, Bob Dylan, in his song had asked once: How many ears must one man have, before he can hear people cry…
We hope ICC has ears and can hear.

Because, another song from the great man says: Please get out of the new one, if you can’t lend your hand… For the times they are a-changin’.