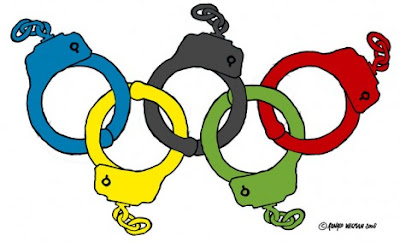 More than 200 countries – 205 in theory – marked the Olympic day on June 23rd. The day has significance in history as it was the same day in the year 1894, when International Olympic Committee was formally established.

As every National Olympic Committees marked the day, their focus was the slogan – Sports for Everyone. Only we, perhaps, marked it without getting the message. For us, it was not for everyone. That has to be exactly the reason why there were two Olympic Committees organizing their own program in two different places. While one chose birthplace of Buddha, the other one chose the capital (as if Buddha was against unity).

If you find it astonishing, you’re in for more shock. Two of our best known sportspersons, and the only players we have produced so far to get ‘qualified’ for an Olympic event, were not the part of celebrations. Yes, Deepak Bista and Sangina Baidya were not present in either of the programs. And why would they? After all, they would not like to be linked with yet another controversy. And which celebration would they choose to attend? They’re affiliated to National Sports Council and would not like to go against what their bosses say.

Now this does not make Bista and Baidya baddies. For they must be as confused as anyone else. For they would have enjoyed being a part of Olympic Day Run as anyone else. For they have contributed to Nepali sport as anyone else, maybe with more glory. Talk to Bista on the topic and he finds it difficult to talk about it (could not talk to Sangina on the issue). For he would not know what exactly to say about not attending the program.

It was the moment the whole Olympic movement was shamed, by the officials who have none of it.

In moments like these, you feel perhaps it is good that Pierre de Coubertin, the person known as father of Modern Olympics is no more. For he started the Olympic movement thinking it would bring world peace. He saw value in the ancient practice of a sacred truce during the ancient Olympic Games, thinking it might have modern implications, and the modern Olympics would have a role in promoting peace. Was he wrong in doing that? Anyone can answer that.

But here we are, trying to prove him wrong. World Peace may be buried deep under the sea, for we cannot even make peace to organize one program together. A common sports fan would like to question: What does it take to let ego go, for common good? Logic behind legitimacy may be secondary; development of the sports should be the primary agenda. And that does not look like happening here.

American President Barack Obama, during his pitch to bid for Olympics in Chicago had said: “[We] reach for a dream – a dream that no matter who we are, where we
come from; no matter what we look like or what hand life has dealt us; with hard work, and discipline and dedication, we can make it if we try. That’s not just the American dream. That is the Olympic Spirit. It’s the essence of the Olympic Spirit.”

Chicago may not have won the bid to host 2016 Olympics, but words expressed cannot be taken lightly. The Olympic spirit is the basis of motto of Olympic movement – Citius, Altius, Fortius (Swifter, Higher, Stronger). And we fail to get there, as we continue fighting among ourselves.

The Olympic spirit is neither the property of one race nor of one age. But it brings, and has to – for everybody’s good – people from all races ethnicities together. Without that, there is no point in claiming to have that spirit.

(PS: This write up appeared in a weekly column of yours truly in The Kathmandu Post, OFF-SIDE, on 25th June, 2011)

(The picture displayed above was taken from http://osocio.org and writer does not claim any rights over the picture)