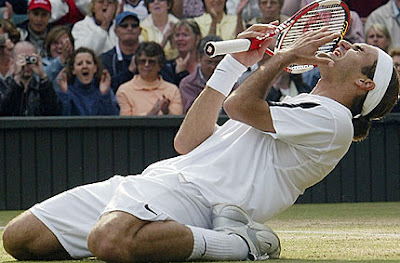 And the Fed Express crashed, after going 2 sets up, for the first time in 179 Grand Slam matches he’s played. The Muhammad Ali look-alike – although a much softer and more erratic version – Jo-Wilfried Tsonga did the unthinkable, stopping clocks and hearts at 4:24 PM on Centre Court on Wimbledon.
Tim Henman, who carried the British torch (read the lone hope) at the Wimbledon towards the turn of the century, had tipped Roger Federer to win the title this time around. The logic was, Federer has become more carefree with age. And that would help him take more risk and kill the opponents. Alas! Henman’s prediction missed just as his volleys did at the Wimbledon’s 4 semi-finals.
Henman may not have forgotten the year 2001, when he beat the newcomer Federer in 4 sets at a quarter-final on the same stage. And he might have recognized, even then, that this 20-year old had, what he himself did not have. But, he may well be as shell shocked as we are after this quarter-final.
Shocked we are. For, Federer had collected as many fans, if not more, as any player in the history of Tennis. For, he restarted the debate “who’s the GOAT (Greatest Of All Time)?” For, he stamped his authority in the world of Tennis and finally settled the debate, appearing in an unprecedented 23 career Grand Slam finals, including 10 consecutive appearances.
But Federer did not become Fed Express just because he was number one for 237 weeks at a stretch. Not just because he appeared in 18 of 19 finals between 2005 Wimbledon and 2010 Australian Open. The Fed Express he became because he made anyone else feel like also-ran for extended period. The Fed Express he became because he added flair of Boris Becker to consistency of Ivan Lendl. To us, he made Pete Sampras look like a robot. The Fed Express he became because he made cricket look boring, as Australia was invincible, West Indies were buried while Sachin Tendulkar was showing signs that he was mortal after all. All with a racket in hand and imagination in the head.
Tennis hasn’t seen many baseliners as comfortable coming to the nets, exhibiting rare backhand smash. He was the one. Anyone else hasn’t had their motion termed as a great liquid whip. Anyone else hasn’t prompted Jimmy Connors to say, “In an era of specialists, you’re either a clay court specialist, a grass court specialist, or a hard court specialist…or you’re Roger Federer.”
Ivan Lendl once said, “Grass is for cow”, frustrated as he failed to win any title on the surface. Federer proved that silken elegance and offense both have a place on grass. He treaded on it, he owned it.
We sat in awe, as he, along with Rafael Nadal revived the legacy of great Tennis rivalry. We were reminded of Borg-McEnroe and Edberg-Becker rivalry that made Tennis exhilarating again. That too in 21st century, when we thought Tennis is all about rising hemlines and designer shows. We loved Nadal; We loved Federer a wee bit more, for the grace he showed after losing to a younger and brasher player on clay and later, even on grass.
He would lose to Nadal – as Nadal lifted his game to the level of insanity, playing against Federer – time after time, in finals. We would think, “Greatness too, has a shelf life”. But when commentators termed him old, we’d scoff. “He’s still in 20s”, we’d say, “Next time!”
A year and a half without title? Not palatable for a champion. But then we were convinced, this Wimbledon would be his. And then came Tsonga. Two sets down, but he hung on, like the Great Ali he resembles. ‘Fly like a butterfly, sting like a bee’. He stung, with a serve at 133 miles per hour. Fed Express stopped. For us, Wimbledon was over.

Post match, Federer said, “Except the score, many things went right”. Next year when he returns – as we, the fans want – we would want that the score goes right, too. For he, more than anyone else, deserves the title for the 7th time.


PS: The write-up appeared in Yours Truly’s sports column – OFFSIDE – in The Kathmandu Post, on 2nd July, 2011)